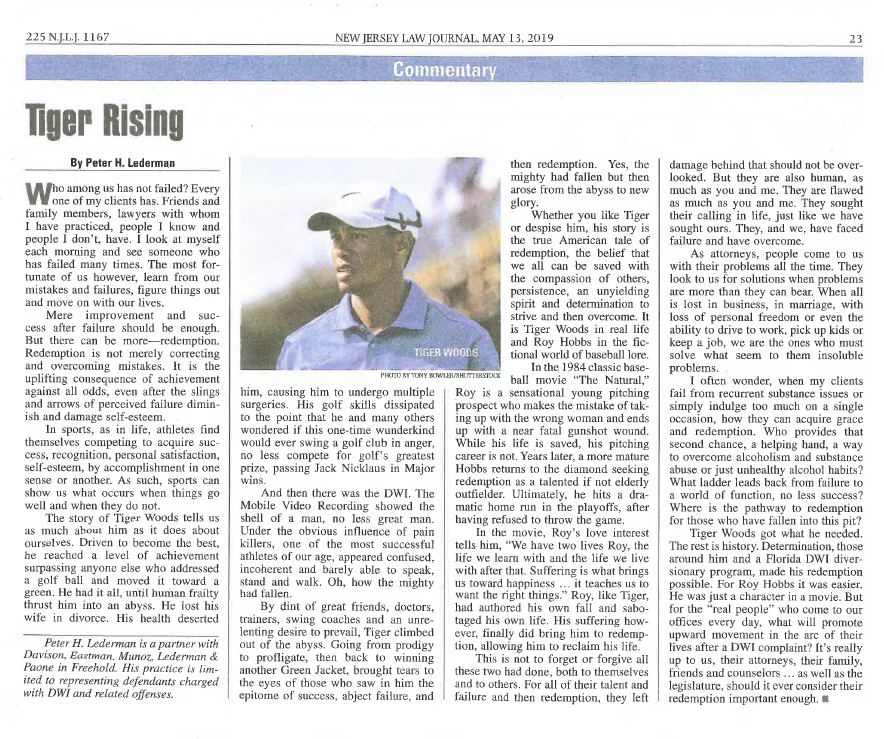 Who among us have not failed. Every one of my clients have. Friends and family members, lawyers with whom I have practiced, people I know and people I don’t, have. I look at myself each morning and see someone who has failed many times. The most fortunate of us however, learn from our mistakes and failures, figure things out and move on with their lives.

Mere improvement and success after failure should be enough.  But there can be more, redemption. Redemption is not merely correcting and overcoming mistakes. It is the uplifting consequence of achievement against all odds, even after the slings and arrows of perceived failure diminish and damage self-esteem.

In sports as in life, athletes find themselves competing to acquire success, recognition, personal satisfaction, self-esteem, by accomplishment in one sense or the other. As such, sports can show us what occurs when things go well and when they do not.

The story of Tiger Woods tells us as much about him as it does about ourselves. Driven to becoming the best, he reached a level of achievement surpassing anyone else who addressed a golf ball and moved it towards a green. He had it all until human frailty thrust him into an abyss. He lost his wife in divorce, his health disserted him causing him to undergo multiple surgeries. His golf skills dissipated to the point that he and many others wondered if this one time wunderkind would ever swing a golf club in anger, no less compete for the golf’s greatest prize, passing Jack Nicklaus in Major wins.

And then there was the DWI. The Mobile Video Recording showed the shell of a man, no less great man. Under the obvious influence of pain killers, one of the most successful athletes of our age, appeared confused, incoherent and barely able to speak, stand and walk. Oh, how the mighty had fallen.

By dint of great friends, doctors, trainers, swing coaches and an unrelenting desire to prevail though, Tiger climbed out of the abyss. Going from prodigy to profligate, then back to winning another Green Jacket, brought tears to the eyes of those who saw in him the epitome of success, abject failure and then redemption.  Yes, the mighty had fallen but then arose from the abyss to new glory.

Whether you like Tiger or despise him, his story is the true American tale of redemption, the belief that we all can be saved with the compassion of others, persistence, an unyielding spirit and determination to strive and then overcome. It is Tiger Woods in real life and Roy Hobbs in the fictional world of baseball lore.

In the 1984 classic baseball movie “The Natural,” Roy is a sensational young pitching prospect who makes the mistake of taking up with the wrong woman and ends up with a near fatal gunshot wound. While he his life is saved, his pitching career is not. Years later, a more mature Hobbs returns to the diamond seeking redemption as a talented if not elderly outfielder. Ultimately, he hits a dramatic home run in the playoffs, after having refused to throw the game.

In the movie, Roy’s love interest tells him, “We have two lives Roy, the life we learn with and the life we live with after that. Suffering is what brings us toward happiness…it teaches us to want the right things.” Roy, like Tiger had authored his own fall and sabotaged his own life. His suffering however, finally did bring him to redemption, allowing him to reclaim his life.

This is not to forget or forgive all these two had done, both to themselves and to others. For all of their talent and failure and then redemption, they left damage behind that should not be overlooked.  But they are also human, as much as you and me. They are flawed as much as you and me. They sought their calling in life, just we have sought ours. They and we have faced failure and have overcome.

As attorneys, people come to us with their problems all of the time. They look to us for solutions when problems are more than they can bear. When all is lost in business, in marriage, with loss of personal freedom or even the ability to drive to work, pick up kids or keep a job, we are the ones who must solve what seem to them insoluble problems.

I often wonder when my clients fail from recurrent substance issues or simply indulge too much on a single occasion, how they can acquire grace and redemption. Who provides that second chance, a helping hand, a way to overcome alcoholism and substance abuse or just unhealthy alcohol habits? What ladder leads back from failure to a world of function, no less success? Where is the pathway to redemption for those who have fallen into this pit?

Tiger Woods got what he needed. The rest is history. Determination, those around him and a Florida DWI diversionary program, made his redemption possible. For Roy Hobbs it was easier. He was just a character in a movie. But for the “real people” who come to our offices every day, what will promote upward movement in the arc of their lives after a DWI complaint? It’s really up to us, their attorneys, their family, friends and counselors…as well as the legislature, should it ever consider their redemption important enough.